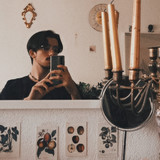 Noah Gempeler, known as Gemp is an 18-year-old beatmaker based in Lucerne, Switzerland. He recently graduated from high school and is now focusing on his music, which he intends to use to fund his life. He also loves to travel, and loves old cars. ;) If he has some spare time, he takes his tent and hikes up into the alps of Switzerland. He also loves to take photos. Especially vintage cameras. When he's not doing either of that, he's probably drawing or wasting his time on Tik Tok. Since the music industry is a difficult place to survive, Gemp is taking some risks. But since he follows his dreams, this is the only right way for him. Gemp experiments with all kinds of samples, and also plays piano and guitar. Lo-fi music and chill beats and more, stop by to relax<3.