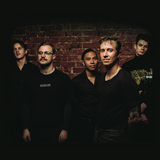 The distinctive sound of Sydney’s Glass Ocean has seen fans and critics captivated by their hypnotising blend of eccentric rhythms, reverberating guitar motifs, and off-the-wall pop sensibility engulfed by soulful, anthemic vocals. Armed with a range of dreamy new soundscapes and complex heavy grooves, Glass Ocean will unveil their debut record ‘The Remnants of Losing Yourself in Someone Else’ worldwide on August 21, 2020 via Wild Thing Records. ‘The Remnants of Losing Yourself in Someone Else’ started out as a concept narrative record, which evolved through the creative process into an honest exploration of personal themes. The album delves deeply into the highs of love and romance, and spirals further into an underworld of loss, tragedy, and malevolence. Glass Ocean delivers an album that draws you into the waves of vocalist Tobias Atkins' heartfelt storytelling, which is escorted by trance-inducing heavy grooves, clouds of futuristic synth layers, and far-reaching, punchy guitars. Produced, mixed and mastered by Chris Blancato (Northlane), Glass Ocean's new record also showcases the continued collaboration with ex-founding member Nic Pettersen (Northlane) who co-wrote album tracks ‘Voyage’, ‘A Dream From Which I May Not Wake’, ‘Soul Slumber’, ‘Divide’, ‘Pride’, and ‘Almaida’. Swaying smoothly between genres and influences, the record ushers the listener through the compelling emotions and energy of Tobias Atkins’ personal narrative and magnetising vocal performances.