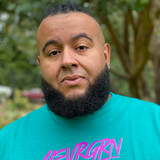 After being given an amazing musical education from the age of 13 and being around music everyday, that made him want to create. In 2009, Kev began writing music as an outlet for his anger and frustration in the world. Since then, it’s grown into so much more. Kev views his music as an extension of who he is as a person. When you listen to his works, it’s not just music, it’s part of his soul. Grammy nominated musician and fellow Washington State artist Q Dot said of Kev’s music “It’s definitely a different door to go into in the music space right now. He has got the trap door, the conscious door, the quasi R&B door and then there’s the Kev door. It’s got all those elements lol it’s got the trap door handle, the conscious door hinges, the R&B door frame, and the door itself is something else lol. I don’t know how else to describe it man.”