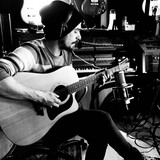 Broken Arrow Music and Kalli, the former lead singer and songwriter for Reykjavik’s Without Gravity (originally known as Tenderfoot), have released Escape Artist, his first new album in over six years. The 6-song EP is a return to the lush, atmospheric soundscapes reminiscent of his Icelandic homeland, from his last release’s exquisite sojourn into Nashville’s Americana stylings. Kalli’s previous album Last Train Home took the unexpected creative path from Reykjavik to Nashville, where he teamed with some of the town’s best musicians to release an album to widespread acclaim, culminating in a nomination for “Album of the Year” at the Icelandic Music Awards (eventual winner was Sigur Rós front man Jónsi’s solo release Go).

The album had the distinct feel one might musically expect when influences from northern Iceland meet America’s front porch. But Escape Artist fully returns Kalli to his homeland, and to working with longtime collaborator/producer Arnar G. (Leaves). The duo’s magic was first realized on Without Gravity’s recordings, then solidified with Kalli’s debut solo album While the City Sleeps; a brooding, late-night travel within a deep, stormy soundtrack that surrounded Kalli’s introspections of life’s changes.....www.kallimusic.com