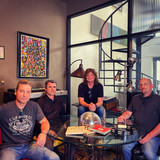 Tora Tora are a Memphis, Tennessee hard rock outfit with a knack for pairing chunky heavy metal riffs with the bluesy swagger of Beale Street. Emerging in the late 1980s, they landed a trio of hits in 1989, one of which found its way onto the soundtrack for Bill and Ted's Excellent Adventure, succumbed to the onslaught of grunge in the early '90s, called it quits, and then re-formed in the 2010s. Formed in 1985 around the talents of Anthony Corder, Keith Douglas, Patrick Francis, and John Patterson, the band adopted their moniker from the song of the same name from Van Halen's 1980 LP Women and Children First. A popular garage band on the local scene, they earned a chunk of studio time after winning a regional Battle of the Bands contest and recorded an independent EP, To Rock to Roll. Two of the songs from the release, "Love's a Bitch" and "Phantom Radio," received multiple spins on local radio station Rock 98, and caught the attention of A&M Records, which quickly scooped up the heavily buzzed-about band. Tora Tora went widescreen in 1989 with the release of their major-label debut, Surprise Attack, which featured the singles "Guilty," "Walkin' Shoes," and "Dancing with a Gypsy," the latter of which appeared on the soundtrack to the hit comedy Bill & Ted's Excellent Adventure. A sophomore effort, Wild America, arrived in 1992 and failed to make the same impact as its predecessor; a third album, Revolution Day, was recorded but shelved. Like many hard rock/heavy metal bands of the era, their success was cut short by the arrival of grunge, and by 1994 they had ceased operations. However, they re-formed in 2008 -- with the original lineup intact -- for a series of live shows, and in 2011 they issued the long-gestating Revolution Day. A deal was struck with Frontiers Records in 2017, resulting in the release of their first collection of all-new material in 25 years, the aptly named Bastards of Beale. ~ James Christopher Monger, Rovi