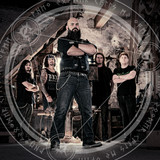 The metal-commando INFECTED CHAOS arose from the ashes of some local bands in 2013 and directly locked itself in to start the creative process. After some intense live-testing – e.g. supporting the almighty Possessed – the band hit the renowned Iguana Studios and could release its debut „The Wake of Ares“ in 2015. Only two years later the successor „Killing Creator“ was unleashed which drove the band through the half of Europe where established events like „MetalDays“, „Winterdays of Metal“ and „Aaargh!-Festival“ were haunted. At this very moment INFECTED CHAOS are housing the band´s own studios to complete their third album!