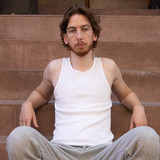 New York native Marlon Craft worked for years on his music before sharing his heady, lyrical rap. Gravitating towards an instrumental style that incorporated both rugged golden-age East Coast hip-hop influences and jazz-touched live instrumentation, Craft's politically conscious lyrics and social questioning were the driving force behind his 2019 studio debut, Funhouse Mirror. Marlon Craft grew up in the Hell's Kitchen neighborhood of Manhattan, the son of a jazz musician father. He spent his teenage years playing basketball and ravenously absorbing hip-hop sounds, and in college he began making music of his own. In 2015, while finishing college, he self-released his first mixtape, Pieces. He followed it up the next year with the so, what are you doing? EP and singles like "Workin'," and "Reason." Craft's style developed over the course of these releases, and his technical abilities sharpened on 2017 mixtape The Tunnel's End. In 2019, he signed on with Sony affiliate Same Plate Entertainment for the release of his politically charged studio debut, Funhouse Mirror. The album's lyrics unpacked issues of racism, classism, and wealth disparity and featured cameo appearances from Ricky Motion, Dizzy Wright, and others. ~ Fred Thomas, Rovi