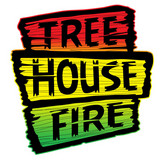 “NEW BRIT REGGAE Look out for Tree House Fire on the festival circuit this summer, new music, new British reggae music” David Rodigan Radio 1 Extra…. Tree House Fire from the leafy suburbs of Surrey and the hills, valleys and beaches of South Wales. THF style is deeply entrenched in reggae with lyrics and melody that presses all the right buttons giving the audience something to think about while jamming to the infusion of reggae, hip hop and Ska with a riff or two of rock on lead guitar. The popularity of the band has seen them share the stage with the likes of The Skints, Reel Big Fish, Anti Flag, Katchafire, Mad Caddies, Macka B, The Beat, The Selector and New York Ska legends The Toasters, along with numerous festival appearances including the UK’s largest reggae and Ska festival, Boomtown Fair, alongside established acts such as Damian Marley,Madness, Cat Empire and Anthony B, to name but a few.