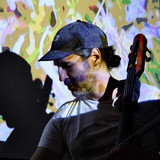 Pablo Ortega is a Spanish cellist and composer based in Bremen, Germany. Currently active as a multidisciplinary professional musician, he studied classical cello performance in Spain and Germany. During his studies, he played cello and synthesizers in pop, folk and rock bands, which allowed him to experiment with different musical genres until he eventually developed his own compositional style. In his work, he blends elements of modern classical music, such as intimate cello melodies, with electronic beats and organic, atmospheric soundscapes on the synthesizer, thus achieving a mixture of genres ranging from cinematic acoustic music to energetic electronica.