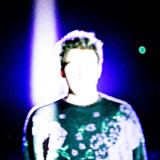 Ritt Momney is the solo project of 21-year-old Salt Lake City native Jack Rutter.   Beginning as an indie rock band comprised of high school friends, the project became a personal outlet for Rutter after his bandmates left on Mormon missions and his girlfriend left for college. In his bedroom, he wrote, recorded, and produced his debut LP, entitled “Her and All of My Friends,” in which Rutter grapples with loss, loneliness, and a drift away from Mormon culture.