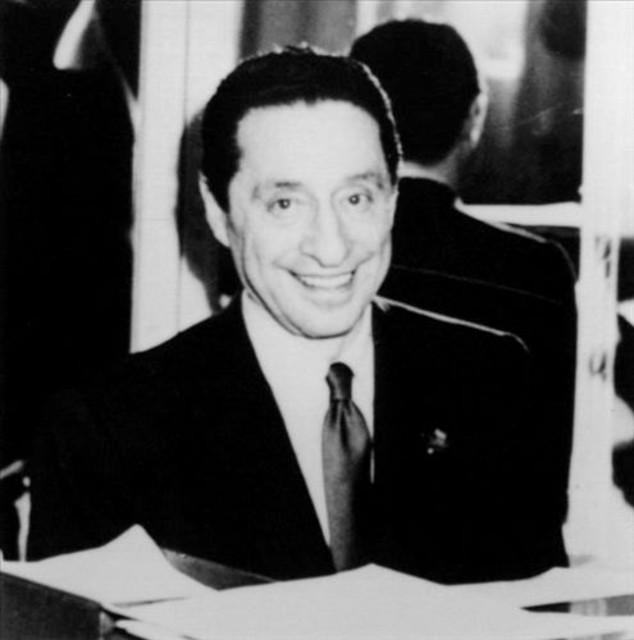 American songwriter Harold Arlen was born Hyman Arluck. His father, Samuel Arluck, was the cantor and choir director at the Clinton Street synagogue in Buffalo. His musical tastes ran from Italian opera to classical music and he was responsible for Harold's musical education. By the age of 15, the young Arluck had dropped out of high school to play piano in local jazz bands and movie houses. He wanted to be a singer and formed his own group, called The Buffalodians. Fletcher Henderson and Arnold Johnson hired him to do song arrangements and Will Marion Cook encouraged him to compose. "Get Happy" was his first big hit and it was later immortalized on film by Judy Garland. On the strength of this success, he was given a year's contract to write songs for the Piantadosi firm, which led to steady work writing music for revues in New York City. Harold Arlen wrote countless songs for musical revues performed in the theaters around the city, particularly revues at the Cotton Club in Harlem. It was here that Cab Calloway, Duke Ellington, and Jimmy Lunceford and their bands performed at night. In one of the 1933 Cotton Club revues, Ethel Waters brought the house down with her emotional performance of "Stormy Weather." Other Arlen songs performed at the Cotton Club include "Between the Devil and the Deep Blue Sea" and "I've Got the World on a String." Arlen composed almost three dozen Broadway musicals and film scores, and his inspiration was diverse and eclectic. He could breathe life into all types of subjects, from the children's fantasy The Wizard of Oz to the socially conscious anti-war musical Hooray for What? His subjects include a setting of an Edna Ferber novel called Saratoga; a setting of a short story about bordello workers in Haiti by Truman Capote called "House of Flowers;" the lighthearted movie My Blue Heaven; and a topical musical about the suffragette Dolly Bloomer. Although The Wizard of Oz is the film for which he is best known and remembered, Arlen's contribution to the development of the film musical is vast. In addition to writing for the theater, Arlen also delved into other types of compositions. His basis was always blues idioms. His Americanegro Suite is a group of songs inspired by the African American spiritual tradition, while his biggest project was a blues opera with over 60 musical numbers. In the score of his blues opera Free and Easy, Arlen seeks to distill the essence of the blues in all its variety and its application to the everyday lives of his characters. Although not a success on the stage, the work ranks as a monument to American popular music next to that of Gershwin's Porgy and Bess.