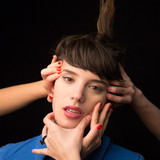 Gisela Fullà-Silvestre records as NOIA, meaning “girl” in Catalan. A sound designer by trade, NOIA launched her debut, Habits EP, in 2016. The EP reflected and refracted her myriad musical and cultural influences, drawing on the traditional music of her childhood in Barcelona, dancehall and tropicalia radio, R&B and soul. “NOIA is a reflection of all of my musical and artistic influences, but processed through my own voice,” says Gisela. “NOIA is who I am when no one’s looking.” Gisela has spent the last few years in a creative shell, experimenting with new sounds and techniques; hence the title of her new EP, Crisàlida, a Catalan word for “cocoon.” Across the EP’s four tracks, NOIA unites the disparate styles of her musical heritage: traditional arias flutter atop left-field pop production, while lyrics float seamlessly from Catalan and Spanish to English. What emerges from Crisàlida is a confluence of cultures, fusing the traditional musical traditions of NOIA’s native country, along with her own intuitive approach to beat-making and experimental pop songwriting.