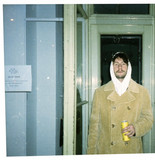 Half american and half german singer-songwriter Chuck Winter combines powerful melodies catchy with bluesy sound on his acoustic guitar. Inspired not only by artists such as Nick Drake, Paul Simon or Bob Dylan, Beirut and Broken Bells, but also by heavier sounds of bands like Led Zeppelin, Rival Sons and Pink Floyd, he combines everything a good artist needs. His honest lyrics and strong voice tell stories of everyday life – from strokes of fate to the banality of smoking a cigarette. His music lets you tune out, dance and gives you goosebumps – all at the same time. He supported bands such as AnnenMayKantereit, Lewis Watson and The Americans, was selected Band of the Week by SZ and PULS by Bayerischer Rundfunk. By working with his new band, the solo artist's music is put into a new perspective. His Debut-EP was released in spring 2017 and is available digitally and physically on all platforms. His new Single THE END, will be released in October 2019 through Sun King Music. www.chuckwintermusic.com