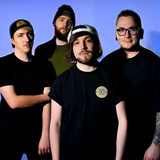 STAY LATE are a pop punk band from the sleepy town of Barnstaple, Devon in the UK. Established in 2017 the band entered the south west music scene with a bang releasing their debut single ‘Growing Up’ and their debut EP ‘Fix Myself’ to mainstream success appearing on BBC Introducing’s round table radio show and appearing live supporting notable touring acts such as In Her Own Words, For The Win and Carousel Kings to name but a few all across the south west. In 2018 the band released their second single ‘Drop Out’. Receiving notable praise for its heavier sounding style, showcasing strong guitar riffs and anthemic gang vocals, the band continued to take the south wests underground music scene by storm appearing live with bands such as Forever Came Calling and The Fallen State as well as numerous festival appearances throughout the summer including Oceanfest and the inaugural Burn It Down Festival. The band began 2019 locked away in the studio writing and recording their long anticipated second EP ‘Faking Smiles’ and with the release of their third single ‘Lonely’ the band are continuing to prove that pop punk is very much alive in the south west receiving more airtime on BBC Introducing and being added to the New Punk Tracks playlist by Spotify editors. With the release of ‘Faking Smiles’ coming in late 2019 you’ll find it hard to escape the STAY LATE cult as they smash through a town near you very soon!