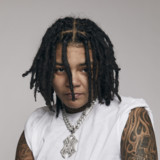 Ever since Young M.A set the streets on fire with her introductory blazer “OOOUUU,” the Brooklyn-bred rapper-slash-entrepreneur has checked items off a bucket list that most dream about. However, with the sunshine comes the rain, and M.A is geared to tell all on her long-awaited debut album Herstory In The Making. Raised in Bed-Stuy—within walking distance of Jay-Z and the late Notorious B.I.G.’s stomping grounds—M.A learned a lot in her formative years. The streets called her early, though losing her brother to gun violence forced M.A into a hard pivot that would change her life forever. After checking the temperature for her music through a handful of rough loosie cuts, she finally dropped off “OOOUUU” in 2016 and it wasn’t long before she became a household name—landing coverage everywhere from Vogue to New York Times, as well as global ad campaigns with Google Pixel 2 and Beats By Dre. “A lot of new experiences have happened for me,” the young artist admits. “I came from the streets and building my own fan base. I was always just trying to…break through.” And then it happened. “It was a sigh of relief,” she says. “This was everything we’ve been fighting for.” M.A’s toured with 21 Savage, opened for Beyoncé, and found herself on her own global tour. She’s even made Forbes’ 30 Under 30 list for 2018 and received a proclamation from New York City.

This is M.A everyday, no compromise. And now it’s time to make herstory.