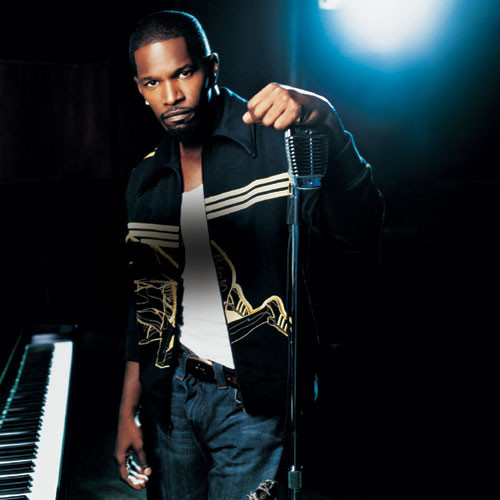 Jamie Foxx leveraged his major credentials as a star on television (In Living Color, The Jamie Foxx Show) and on the big screen (Any Given Sunday, Collateral, Ray, Django Unchained) into million-selling, Grammy-winning status as a contemporary R&B singer and songwriter. Born Eric Morlon Bishop, Jr., Foxx simultaneously developed his comedic, acting, and musical skills while growing up in Terrell, Texas. He played piano and led choir in his Baptist church, and went on to study composition and classical music while attending college in San Diego, California. In July 1994, after he established himself as an actor, Foxx released his debut album, Peep This, on the 20th Century label. Despite a low profile and minimal radio presence, the album scaled up to number 12 on Billboard's R&B chart. Until the release of Twista's Kanye West-produced "Slow Jamz" single in late 2003, it seemed as if Foxx's music making was merely a one-off -- something to get out of his system. The humorous song topped the Billboard Hot 100 and reignited Foxx's affair with the music industry. It also helped set the stage for his second album, released through J Records in December 2005, after he picked up an Academy Award for his lead role in Ray. Upon release, Unpredictable duked it out for the number one position on the Billboard 200 with Mary J. Blige's The Breakthrough. His album, featuring collaborations with Timbaland and Babyface, among many others, reached number one and eventually went platinum. The title track, as well as "DJ Play a Love Song," were Top 10 R&B hits. As time allowed -- every few years -- the actor returned to music. Intuition, released in December 2008, was another highly collaborative set that included productions from Timbaland, Just Blaze, "Tricky" Stewart, and the-Dream. "Just Like Me" and "She Got Her Own" went Top 10 R&B, but third single, "Blame It," featuring T-Pain, eclipsed them, reached the top, and eventually won a Grammy for Best R&B Performance. Though the Drake collaboration "Fall for Your Top" became Foxx's second number one R&B single in February 2011, Best Night of My Life -- released the previous December after a transfer to RCA -- didn't fare nearly as well as the two previous full-lengths. Hollywood: A Story of a Dozen Roses, Foxx's fifth album, arrived in May 2015 with guest appearances from Chris Brown, Wale, Pharrell Williams, and Fabolous. ~ Andy Kellman, Rovi