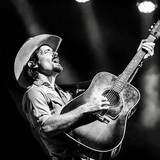 A Lone Star State country singer with equal parts barroom swagger and poetic, new tradtionalist pop smarts, Zane Williams first caught the public's attention in 2009 when Jason Michael Carroll released a hit version of the Williams-penned "Hurry Home," a tender-hearted ballad about a father trying to reconnect with his runaway daughter -- Williams' won a $20,000 cash prize from the prestigious John Lennon Songwriting Contest with his version of the song, which appeared on his 2006 debut album of the same name. Williams issued his sophomore outing, The Right Place, which he co-produced with Radney Foster, in 2010, followed by Ride with Me (2011) and Overnight Success (2013). His fifth studio long-player, 2015's Texas Like That, debuted at the number 31 spot on the Billboard country albums chart. In July 2016, Williams released an anthemic single, "Bringin' Country Back," which was a preview of his album of the same name, released by Williams the following October. The Bringin' Country Back album rose to 48 on the Country Albums chart and 22 on the Heatseekers chart. ~ James Christopher Monger, Rovi