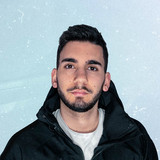 Multi-awarded Madrid based Danny Leax, is the new spanish upcoming talent bringing a fresh new sound to the electronic music scene. At the age of just 21 years old he has already made moves to establish himself as one to watch for the next generation of electronic talent.   Debuting on Spinnin Records' Talent Pool in early 2019 and gaining over 3 Million streams on spotify with his first releases he has received the recognition and support from many top djs in the scene. His career took off later that year after winning renowned remix competitions for Musical Freedom, The Chainsmokers and Jonas Aden leading to a collab with Jonas himself and his debut on Musical Freedom and Spinnin Next.   Influenced by old school retro movie soundtracks and modern artist like Skrillex and Flume, he promotes a mix of EDM, Pop and House with atmospheric breaks and energetic drops featuring his trademark vocal leads.   Continuously developing his sound, he has now embarked on a new musical venture to bring some fresh new sounds to the table.