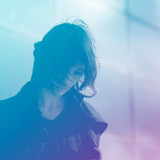 Olga Wojciechowska is a Polish composer and multi-instrumentalist whose work drifts between modern classical and electronic music. Her compositions are frequently sought out by acclaimed directors and choreographers for dance, theatre and visual projects. Olga’s commissioned work includes music for Sidi Larbi Cherkaoui, Yabin Wang, Daniel Proietto, Aakash Odedra among others. Since the release of her album Maps and Mazes in 2015 her music has been featured in compilations published by Ninja Tune, Traum Schallplatten and The Wire. As a member of various live ensembles she has worked with contemporaries such as Nils Frahm, Greg Haines and Alvaret Ensemble. Aside from her commissioned work, Olga also creates music for her own pleasure and artistic endeavor. Much of her personal work was released anonymously under the pseudonym Strië, where Olga has released albums with labels such as Soundscaping, Time Released Sound and Serein.