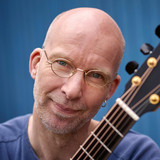 Jens Kommnick is a musician, arranger, composer, producer and author and he has been playing acoustic guitar for 35 years. He is considered to be a leading exponent of the Celtic Fingerstyle Guitar who integrates other musical influences (Jazz, Classical, Rock) in his delicate style very successfully. His debut album Siúnta (© 2008) received excellent international reviews and got radio play in and outside of Germany. His collaboration with renowned singer songwriter Reinhard Mey widened his fanbase and his album Kommnick spielt Mey – released by EMI records – received wide critical acclaim. In 2012 Jens became the first and only German musician ever to win the "All Ireland Championships", not only once, but twice, both as a solist and an accompanist. Also his current album redwood (© 2015) evoked enthusiastic reactions at home and abroad, including the highly renowned Preis der deutschen Schallplattenkritik (German Record Critics' Award)! Jens' pleasant stage presence and humorous introductions guarantee a particularly enjoyable concert experience for the listening audience.