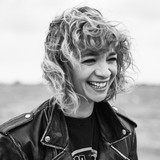 With a voice that's both silvery and raw, Dutch singer and pianist Jacqueline Govaert was born in Kaatsheuvel, the Netherlands and began writing songs at age 12. As lead singer and main songwriter, she formed the English-language Dutch alt-rock group Krezip in Tilburg in 1997 while still in her midteens. The band released an EP titled Run Around in 1999 and signed with Warner Music the following year. Their first full-length album, 2000's Nothing Less, featured the hit song "I Would Stay," and topped the album charts in the Netherlands and Belgium. Following extensive touring, Govaert needed vocal cord surgery prior to the release of 2002's Days Like This. After being dropped by Warner, the band signed with Sony BMG and released the Dutch chart-topper What Are You Waiting For in 2005. That same year, their song "Same Mistake" was featured in the romantic comedy Het Schnitzelparadijs, the highest-grossing film of the year in the Netherlands. A more electronic, disco-influenced album, Plug It In, arrived in 2007, and Krezip's final album, Best Of, which included three new tracks, followed in 2008. After the group officially disbanded in 2009, Govaert quickly embarked on a solo career, releasing Good Life in the summer of 2010. It hit number three on the Dutch album chart. The intimate Songs to Soothe followed in 2014, and topped the chart. Recorded in Los Angeles with guests including drummer Matt Chamberlain, bassist Bob Glaub, and guitarist Val McCallum, Lighthearted Years became her third straight Top Ten album after its release in 2017. ~ Marcy Donelson, Rovi