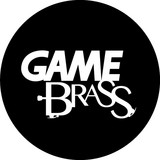 The Game Brass is a quintet (and friends) who play video game music. Their mission is become the definitive brass quintet of video games, bringing classical chops to the game world, and showing off game music in the classical world. The Game Brass is constantly arranging and recording new material, releasing new videos on Youtube at least once a month! So far the music includes franchises like Mario, Final Fantasy, Castlevania, and much more. Our core performers include John Robert Matz on trumpet 1, bandleader Robby Duguay on trumpet 2 (also responsible for our videos and mastering), Danny Flam on French horn, Daniel Romberger on trombone, and Alex Hill on Tuba. Arrangements are written by members of the band as well as collaborators, most frequently Thomas Kresge who also is the band's primary mixing engineer. Business inquiries can be directed to thegamebrass@gmail.com.