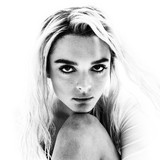 Charlotte Lawrence has been building steam since her first EP 'Young' came out in 2017 and was streamed in the millions, but over the course of 2020 the 20-year-old musician has slowed down, consolidated and spent the time discovering her voice, her style, her story. Over FaceTime from the floor of her bedroom in Los Angeles, she talks with unbridled enthusiasm at a hundred miles an hour about her sonic influences, her life inspirations, her struggles, her hopes and dreams. She talks like someone who doesn't have a moment to waste not telling the world who she is and why. She talks like someone who knows what they want to say and how they're going to say it. Hence her forthcoming EP's title 'Charlotte'. The six song EP is led by single 'Talk You Down', an addictive percussion-driven electronic pop number about her anxiety. Elsewhere she explores fear and struggle through a relationship on 'Sin x Secret', a sense of feeling lost on 'Cowboys', aching heartbreak on 'Slow Motion', the perils of love on 'You', and addiction and dependence on 'RX'. Born and raised in LA, Lawrence spent little time in the city and more by the Malibu coast and up in the canyons. She grew up playing piano from the age of five and got into guitar around the age of 13.

Charlotte has spent the past few years writing and recording while finding her musical voice, and she's just getting started.