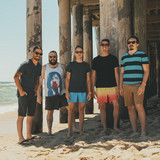 United by their friendships and favorite records, the debut LP from Philadelphia, PA’s Cassettes is a love letter to the FM era. A time when every song could be the single, every line could be the chorus and every guitar solo was an octave higher than the last. Produced by Ace Enders (The Early November) and Nik Bruzzese (Man Overboard), Wild Heart’s sunset strip leads and flannel-draped power chords clash with bar-band pianos and new wave synths for a sound that recalls pop radio of the 70s, 80s and 90s while keeping its feet firmly planted in the modern day. “The personality of the band is perfectly captured here” says Enders. “It's similar to when the Gaslight Anthem released The '59 Sound and people freaked out because it was this mish-mosh of genre but became something cool and new. It reminds me of what that felt like which is awesome.” A pristine mix by Vince Ratti (Brand New, The Wonder Years, The Menzingers) make every song shine as Cassettes turn the radio dial with each track. Their relentless hooks and youthful energy are backed by a live show to match and when they take a rare moment to breathe (“Love Songs On the Radio”, “Ruin Your Night”) Cassettes prove they do 11 as well as any other number on the amplifier. While wiser and more experienced, they haven't lost that intangible enchantment of making music for the first time. Wild Heart perfectly captures that feeling, filters it through your old car stereo and blasts it full volume for the entire city to hear.