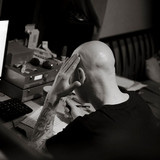 Born in Govan and raised in Penilee two notorious housing schemes in the South Side of Glasgow, MOG has built himself a reputation for being a true lyricist, with his gritty autobiographical rhymes and his unmatched flows and delivery. His poignant observations of life in all its many guises around him, and his social commentary make for a compelling and rewarding listen on many levels. MOG has inspired a whole new generation of rappers to pick up the mic and the pen, as well as giving a generation of people some real quality songs that they can relate to.