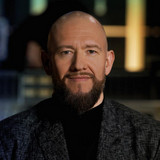 British DJ/remixer/producer Tom Middleton became involved in electronic music in 1989 after meeting Richard D. James, better known as Aphex Twin, in Cornwall, England. After adopting the moniker of Schizophrenia, the pianist, cello player, and former graphic-design student debuted in the electronica field with the seminal EP Analogue Bubblebath, released by Mighty Force in September 1991. However, his breakthrough came after he joined Mark Pritchard on a series of production projects -- including work as Reload, Global Communication, Link & e621, and Jedi Knights -- beginning in 1992 and released on their labels Evolution and Universal Language. The duo's Global Communication alias earned the most praise, due to the 1994 ambient house masterpiece 76:14 for the Dedicated label. After moving on to electro with the Jedi Knights LP New School Science, Middleton and Pritchard began working alone as well as together. In 1999, Tom Middleton started a project called Cosmos and released the sizeable 1999 club hit "Summer in Space" on Island Blue. His only full-length releases were mix albums, though, including 1999's A Jedi's Night Out and 2002's The Sound of the Cosmos. ~ Drago Bonacich, Rovi