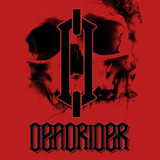 DeadrideR, is an American Thrash Metal / NWOBHM band from Syracuse, Upstate New York, United States. The band was formed in 2015 in Auburn New York by vocalist/guitarist Johnny Volatile and drummer Dante Kane, and has been based in Syracuse for most of its career. the current lineup features Johnny Volatile on guitar and lead vocals,Mortus Loki on Bass, and Dante Kane on drums. Deadrider earned a growing fan base in the underground music community and won critical acclaim with its first 2 demos Reaper and Brainwashed.