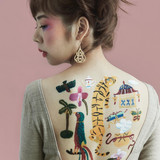 Japanese chamber pop artist and composer Babi. In 2009, The music of Babi was nominated several times for the radio show "RADIO SAKAMOTO" by Ryuichi Sakamoto, and was praised. Babi studied under Kenichi Makimura, a music producer who has produced for artists such as Tatsuro Yamashita and Flipper's Guitar, and Toyoaki Mishima, the manipulator of Cornelius. In 2011, Babi released the first album "Rokushoku No Tategami to rhythmical", and in September 2013, the second album "Botanical". Babi provides music for domestic and international TV commercials, such as "ANNA SUI", "Honda", "KOSE" and so on. The video game of Nintendo Switch, Pikmin 3 Deluxe, which released in October 2020, Babi composed for a part of in-game music and sang a duet with Pikmin for the side stories' ending. Focusing on the creation of contemporary chamber music-like sounds, Babi incorporates colors, food, events, music, plants, insects, and emotions into the music as if it were a diary.