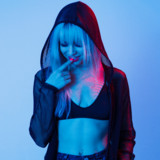 MYNXY [Mink-See] is a Nisga’a singer, songwriter, producer and DJ. She has become a staple of the West Coast music scene and has performed at large scale festivals including Pemberton, Seasons, FVDED In The Park, Snowbombing Canada, and Contact. She was recently signed to Triple A Talent, a boutique Agency owned by Greazus that represents the best underground artists in Canada and the USA. At the outset of her emergence she quickly became known for singing live in her DJ performances, whose genre-bending unpredictability would often mix elements of R&B, Hip Hop, D&B, House, and Bass. Her trained ear and versatility has led her to writing & singing top lines for producers all around the world including Australia, Italy, and Spain. In the Spring of 2021 she released her debut four track EP with Sullust. The EP, “Get Down”, available on MYNXY’s own label Dancing Donut Records, features a remix from renowned bass producer Konka (Sleeveless, Aufect, Deep Dark & Dangerous).