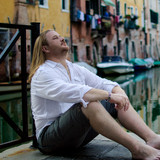 Jacques Rautenbach, a well known South African musician has been making waves the past years as neo-classical composer and with support from fans throughout the US & Europe will soon be a name to remember. He has released four albums. "I have been privileged to work with a variety of soloist, from top South African violinist(s) Evert van Niekerk & Lizelle Le Roux, the impeccable JPO first chair cellist Susan Mouton aswel as Israeli “Violin Like that” sensation Ariella Zeitlin". Jacques’s online presence and support has also dramatically grown with songs such as “The Dream Giver” and "Amsterdam Turmoil" which has more than 120 000 combined video views... The music has steadily been infiltrating the market with the support of various radio stations in Netherlands, Romania, Uzbekistan, Australia and with eight South African stations ( including; Classic FM, Fine Music Radio & RSG) . The latest album “Dreamers Lullaby” is a collection of acoustic baroque inspired music but he’s also busy composing a rock symphony “Etsla Llum” for stage production and recording