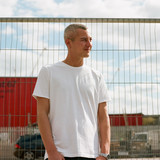 Following in the footsteps of Dizzee Rascal, Tinchy Strider and Tinie Tempah, Devlin broke through from London's underground grime scene to achieve mainstream success. Born in Dagenham, Essex in 1989, James Devlin grew up listening to Bruce Springsteen, Bob Marley, and the Supremes, but developed a love of hip-hop after buying Nas' It Was Written album. At the age of 13, he began MC'ing on various pirate radio stations and was eventually spotted by influential grime artist Dogzilla, who asked him to join the O.T. Crew. In 2006, he released his debut mixtape, Songs from the Crypt, and two years later, received world-wide attention when Kanye West posted a video of him freestyling on his blog. Thanks to his appearance on the prestigious BBC Sound of 2010 shortlist, Devlin signed to Island/Universal Records and began work on his debut album, Bud, Sweat and Beers. Following a support slot on Chase and Status' U.K. tour, he released the singles "Shot Music" and "Brainwashed" (the latter was his first hit, which charted at number 31) and was nominated for Best Newcomer at the MOBO Awards. His 2013 follow-up, A Moving Picture, featured production work from and vocal collaborations with big pop names like Labrinth, Naughty Boy, Katy B, and Ed Sheeran, and saw Devlin tread the fine line between street cred and mainstream blandness, remaining for the most part on the right side of the line. 2017 saw the release of his third studio LP, Devil In, which was preceded by the singles "50 Grand," "Bitches," and "Castella." ~ Jon O'Brien