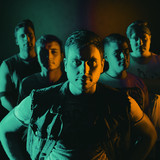 Facing Fears stands for Modern Hard Rock. This may sound contradictory in many ears at first, but Facing Fears embodies exactly this balancing act, which combines the "good old days" with modern sound. The band's hard rock is modern because Facing Fears does not limit itself to the old virtues, but integrates influences of hard metal and melodic pop music into their songwriting. This way every song creates a familiar feeling in the listener's mind without missing tension and variety. The art is to present the listener with music that does not yet exist in its own right, but which immediately catches the listener's ear and gives him the feeling that he has never heard anything else. The first EP "Chapter One" was produced and distributed independently in early 2016. After almost 40 shows in two and a half years, the production of the first longplayer was finally started. With Aljoscha Sieg (Pitchback Studios) the right producer was found for the realisation of the record and with "Horizons" the next coup of Facing Fears was released for the first time under record contract. In 2020 Facing Fears opens the next chapter of the band's history with the single "Forever Ends", including new musicians on drums and bass. Again the top sound is influenced by the Pitchback Studios and knows how to inspire: You will understand!