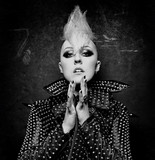 As the saturated synths rise behind the lyrics “Just take your stamp off my design” on Josie Pace’s driving single, “Battleground” we immediately understand this is not an artist who is weak when abandoned. Instead, this Detroit artist’s music represents a piece of her solitude. The blistering glow of downtempo post-industrial beats, electro-pop melodies and layered soundscapes are home to Josie’s captivating lyrics; she is a songwriter in the purest sense. The result is a pulsating sound that will haunt you with vulnerability while basking in Josie’s world of self-reflection and unapologetic rock and roll attitude that Detroit is legendary for. When musician and producer Ken Roberts saw an acoustic performance of Josie on Facebook he was blown away, the raw and intimate performance captured the one thing all songwriters strive to achieve “believability”, and he knew he had to work with her. The two started working together with Josie’s songs as the foundation. As an accomplished guitar player, Josie molds and refines her songs acoustically only to tear them apart with Roberts’ unique production style and his ability to create dark beats with grinding synths that compliment Josie’s voice well. Songs quickly formed into a unique sound that pull from the likes of Depeche Mode and IAMX yet contain a high art fashion swagger as if you just bumped into David Bowie at a Halston Party.