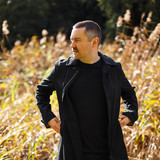 Mantra is one of Australia’s most respected Hip-Hop artists. After first becoming known for his work with iconic Melbourne band “Illzilla”, Mantra has been a powerful force within both Hip-Hop and the wider music industry for over a decade. His debut solo album, 2010’s Power of the Spoken, received widespread critical acclaim and earned the coveted “Feature Album of the Week” spot on Triple J. This success was quickly followed up with 2011’s Speaking Volumes, featuring the radio smash-hit Got Me Wrong. Mantra’s latest album, Telling Scenes, debuted at #1 on the AIR Album Chart, #1 on the ARIA Urban Chart and #3 on the ARIA Australian Album Chart. Telling Scenes was a hit with fans and critics alike, Rolling Stone naming it “one of the Hip-Hop records of the year” in a glowing 4-star review. Now in 2020, amidst unprecedented global chaos and uncertainty, Mantra offers us his most personal and reflective record yet. His new album, the bridge, represents a turning point in his life, both personally and artistically. After going through some of the most challenging events of his life, Mantra has created a truly remarkable document of the pain and darkness of that time; but also the relief and joy he has discovered in moving forward.