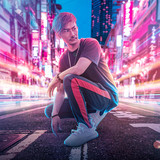 A Japanese music producer and songwriter who has been supported by top DJs all around the world such as Armin van Buuren, Davus Guetta, Steve Aoki, Afrojack, Nicky Romero, Hardwell and so many more. His music has played on their radio show and big music festivals where they appeared. He has signed one of the biggest dance music label called Armada Music. In addition to those global activities, he is also in charge of arranging and composing for major artists in Japan. Now in 2020, he seems to make the music he really want and bring it to world.