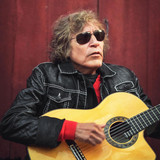 The title track on José Feliciano’s latest album Behind This Guitar sums up, with uncanny accuracy, the still-unfolding career of this remarkable and singular figure in American musical culture of the last half-century. Puerto Rican by birth, a New Yorker (Spanish Harlem) from his childhood, José Feliciano has been a fact of American musical life since his breakthrough at the height of the Sixties – the golden age of American pop and rock music. Feliciano’s new album on the Anthem label is more than the latest turn in an uncommonly long and steady performing and recording career. Behind This Guitar brings the singer/guitarist full circle with producer and old friend Rick Jarrard, whom RCA Victor assigned to produce the very young Feliciano in the late 1960s. It was Jarrard who convinced Feliciano to record The Doors’ “Light My Fire” for their album Feliciano! – the record that made him a household name in 1968. Two years later, in the midst of recording a Christmas album, it was Jarrard who told Feliciano they needed a new song and encouraged Feliciano as he virtually improvised the enduring classic “Feliz Navidad”. Together again for Behind This Guitar, artist and producer have rediscovered their rhythm, in collaborating on the first album Feliciano has ever recorded in Nashville.