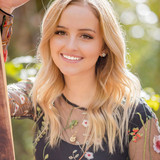 America’s Got Talent Finalist –singer, songwriter, pianist and speaker. Evie Clair’s album Okay Day hit the iTunes pop chart just after her original song was featured in a movie soundtrack. Delta Airlines used her single in their holiday commercial and she was the headliner for a show in Reno then began touring with the #1 selling broadway magician, Adam Trent. Her first America’s Got Talent video had the 3rd highest view count on YouTube for 2018. Evie continues to write and release new music, perform and speak for live events. She is a champion in the fight against cancer after losing her father and she strives to live a life that would make him proud.