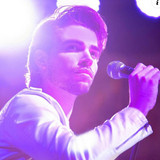 Isaiah Grass is an American singer and songwriter who is ranked No.1 on the Chicago Reverbnation Pop Chart. Grass received the 2013 Male Pop Vocalist of the Year Award from the International Music & Entertainment Association and has performed on well-known stages and festivals across the United States. He has also collaborated with Anne & Robert H Lurie Children's Hospital of Chicago, St Jude Children's Research Hospital, The Salvation Army, The Greater Chicago Food Depository, among many others to help raise funds and awareness to their organizations. Grass has been invited to perform as a musical guest on various morning talk shows: Windy City Live, WGN, Fox 6 Now, Your Carolina, Morning Blend, The Jam. He has also been asked to sing the national anthem for televised events for different sports leagues. Recently, Isaiah was featured on the nationally syndicated television show, American Idol, where millions of viewers watched multi-platinum artists Katy Perry, Lionel Richie, and Luke Bryan stand up and sing - along with him during his audition. Grass has been seen in commercials, billboards, magazines, and has collaborated with well-known brands such as Express, Bud light, Original Penguin, and more. Isaiah's fanbase continues to grow worldwide, he is verified on social media, and his website has over 1.2 million hits.

Grass music is a mixture of pop, rock, and dance which has received airplay on various radio stations.