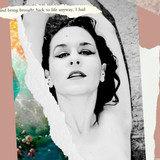 Julia Palombe is a rare bird in the French musical landscape. She began her career in 1985, when for the first time she went on stage, still a child. Since then she has developed her universe in the form of songs, books, choreographic or theatrical pieces. A flamboyant artist with a devilish pen, she thumbs his nose at gloomy self-righteousness and the grayness of hearts, and offers a joyful living together! It is said that in the deep hours of the night, she raises the temperature of her voluptuous verb ... Read in the press: "To fight the dark paths of hatred, it is urgent to follow the luminous path of Julia Palombe ...." "Of mixed blood, writer and singer, the fiery Julia Palombe does not lack temperament!" "Julia Palombe breaks free from the barriers of fear, shame and guilt, to find the path of pleasure ..."