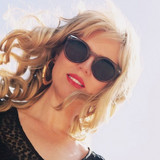 Known for her heartfelt and soulful songs, Sydney based singer-songwriter Lucy Burke can win you over with a single chord. Influenced by such acts as The Beatles, Norah Jones, Portishead, Ed Sheeran and Eva Cassidy, Lucy’s sound is diverse. With a love of songwriting and storytelling, Lucy believes in giving each song its moment in the sun. She delights in collaborating with her band members and her producer to experiment with different genres and styles, allowing the songs to stand on their own. Breaking out of genres, her music includes elements of soft acoustic pop, to jazz, electronic, folk and even funk. Whether being a soft acoustic ballad in Please Stay or a dramatic epic based narrative fitting for a soundtrack in Calm Before the Storm, to a throwback to the classic jazz ballads of yesteryear in Luckiest Girl, Lucy Burke is not one to be boxed in. Performing with her stellar live band, Lucy has become a premier act in the Sydney music scene and she delights audiences with her varied sound from soft to powerful vocals. With three studio albums to her name and her debut album being recorded at Abbey Road Studios, a love of songwriting and a passion for music, it is no wonder Lucy has a loyal following.