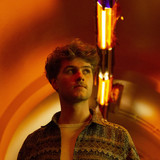 Writist is now Contraire! Follow our new page now! After a 4-year solo career we will steer another course. Under the name Writist, Dutch singer, songwriter and producer Maurijn Teunisse played 150+ shows on multiple stages in the Netherlands, Germany and Spain, and on Dutch radio (NPO 3FM). Now it’s time for Contraire. A brand new indiepop band, full of contradictions such as electronic though organic, pop and also alternative, and uplifting but touching. On a journey through all colours of the spectrum. On March 12th debut single ‘Ultraviolet Lights’ will be released by this quartet.