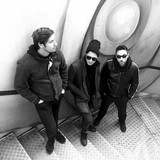 Bright Lights Apart beginning is dated in 2013 basically as a solo project by Miles.t. The project became actually a real band in 2015 when a stable line up started to working at the first official album As Everything Falls Apart released in 2016. With the same line up the band released a last single called A World Set On Fire and then the two main members Miles.t and Slug decided to start a new phase. They wanted in fact to focus the sound mainly in electronic music without renoucing at a certain amount a power that's why they actutally remained the only member of the project until they ask Dave to join the working team for playing guitars in the new record the were writing. All this fact happended in fall 2017. During 2018 the band remained closed in its studio producing the new album Post Utopia Soundscapes that's finally is released in Febrary 2019.