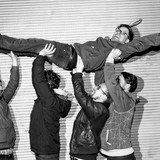 Dobré started as a solo project of singer-songwriter Joe Dobroschke around 2006 in Munich, Germany, and quickly evolved into a 5-piece band. Dobré have since released several albums and EPs touring all over Germany, Switzerland and the UK, where Dobroschke lived between 2012 and 2015. Dobré's sound is influenced equally by the American New Indie-Folk wave headed by acts such as Bright Eyes or Devendra Banhart and 60s Rock'n'Roll informed Indie from the likes of Ezra Furman whilst stressing a highly individual approach. Dobroschkes extremely versatile voice and playful yet mature songwriting make for a surprising and very satisfying listen.