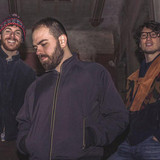 Miele is a 3 piece band formed out of the void and desolation that only a one-horse town can give. The group gathered the first time in 2017 to perform live songs off the act “Smnspz” (Simone’s solo project) but it was only in early 2019 that the guys decided they wanted to write some music together. The band’s line-up consists of vocalist and guitarist Simone Rosani, bassist Giulio Cipelletti, and drummer Angelo Anselmi, all three coming from previous different projects while sharing an obvious love for that american alternative/rock sound. Over the course of a year the band spent a lot of time in a basement where they worked on several song ideas and eventually recorded six tracks that Jesse Cannon (Somos, Transit, Man Overboard, etc…) mixed and mastered at Found Soundation Studios in Brooklyn, NY. The record describes the suffocating reality of small town life, where the world seems to have clear binding limits, making it hard to push dreams beyond the boundary. Miele’s sound evokes reminiscences of late 90’s/early 2000s bands with dream-pop, emo, country rock hints (ex. Pinegrove, Hovvdy).