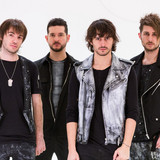 Italian pop-punk outfit Finley formed in Milan in 2002, its members (all born in 1985) hailing from near the town of Legnano. Guitarist Carmine "Ka" Ruggiero, drummer Danilo "Dani" Calvio, and singer Marco "Pedro" Pedretti were schoolmates, and it was the latter who introduced bassist Stefano "Ste" Mantegazza, with whom he used to play in a grunge band, to the others. In 2004 the band, whose moniker is a tribute to NBA basketball player Michael Finley, recorded a demo titled Make Up Your Own Mind, which gained them the attention of superstar producer Claudio Cecchetto, who found them a record deal. Their first single, "Tutto è Possibile" (an Italian version of the title track from the demo) saw the light the following year, while their debut album, Tutto è Possibile, was released in 2006. Thanks to its poppy and faux-aggressive tunes (one of them being the single "Diventerai una Star") and the appeal of the band to teenaged girls and (to a lesser extent) boys, the album ended up earning first a gold and then a double-platinum record in Italy. In 2006 Finley also earned the MTV Music Award for Best Italian Act. At the end of the long tour that followed the release of that album, Finley returned to the studio in order to record its follow-up. Titled Adrenalina, the record was released in June 2007, and confirmed the status of its authors as teen idols. In 2008, Finley took part in that year's Sanremo Music Festival, finishing sixth with the song "Ricordi," later to be included in a repackaged and expanded edition of Adrenalina, titled Adrenalina 2, which also included a DVD and several unreleased tracks, among which was a cover version of Goo Goo Dolls' smash hit "Iris." By the end of 2008, Adrenalina 2 had sold enough to be awarded with an Italian platinum record status. Working again with longtime producer, Daniele Persoglio, Finley recorded the 2009 EP Band at Work, which contained the fan favorite and band anthem "Gruppo Randa." It paved the way for the release of their third proper full-length, Fuori!, which appeared in March 2010, becoming another Top Ten chart success for the band. The year 2010 also saw the first personnel change for the group when bassist Mantegazza was replaced by Ivan Moro, who made his recording debut on 2012's Fuoco e Fiamme, marking both a grittier sonic direction for Finley and also inaugurating their own independent label, Gruppo Randa Records. Wasting little time, the group returned later that year with another new release, Sempre Solo Noi, which commemorated their tenth anniversary as a band. The following year, Finley contributed three songs to the animated Lego series Lego Legends of Chima, bringing their music to an international audience. A four-year gap preceded the release of Finley's sleek sixth album, Armstrong, which appeared in late 2017. ~ Aurelio Pasini, Rovi