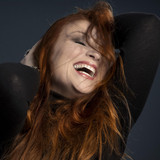 British singer/songwriter Judith Owen's eclecticism has seen her records shelved in the rock, folk, and jazz sections of record stores. Her debut solo album, Emotions on a Postcard, was released on her own label in 1996. Among its songs was "Hand on My Heart," which was featured in the 1997 film As Good as It Gets and appeared on the soundtrack album. Owen befriended singer/songwriter Julia Fordham. Another musical association was struck up with Richard Thompson She released her second solo album "Creatures of Habit"

and 12 Arrows (2003), her third album, boasted guest appearances by Julia Fordham and Richard ThompsonIt earned her an opening slot on a k.d. lang tour. In 2004, Owen released a holiday EP, Christmas in July, including her cover of "Christmas with the Devil," a song by her husband's fictional group Spinal Tap. She also placed her song "Dreaming" in the film P.S., then used it on her fourth album, Lost and Found 2005 and on her fifth album. 2016 acclaimed album Somebody’s Child “one of the Top 100 albums of the year - The