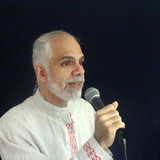 Ylich Orsini, singer, composer, arranger and producer, known in Caracas nightlife as El Ruso, born in the Venezuela of the sixties, where he takes his first steps. At a young age he moves with his family to the city ​​of Berlin, Germany, where he lived for a while to finally settle in Moscow, Russia, where he practically passes his adolescence. After several decades dedicated to Venezuelan music, and especially to "cañonera music" (with the group Los Cañoneros), he decided to take a leap towards Latin rhythms, with a project that includes Russian songs, sung in Russian and versioned by him at Caribbean rhythms, inclining mostly to the salsa, a genre that has earned him many accolades, as many consider him to possess a charisma and a typical salsa voice. Thus is born "Rusia con Sentimiento Latino" (Russia with Latin Feeling", a title with which Ylich El Ruso customizes his project, where he gives free rein to all his Russian-Venezuelan musical experience. He begins to delve into that mental archive of all those Russian musical hits of his adolescence, while he makes a search of current repertoire through the Internet and direct contact with Russian friends who recommend various singers and songs.