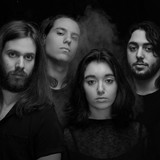 Jane Doe is not your average young band – not by a long shot. A once in a lifetime set of circumstances brings together two sets of siblings and music industry offspring, to create a sound and a mission not seen or heard in decades. With an authentic sound weaved from the milieu of rock and roll, Jane Doe is fronted by a defiant, opinionated but incredibly smart and compassionate young woman, singing, screaming and messaging an entire generation of whom she’s connected to, and in many cases, speaking for. With tunes like the brutally honest ‘Final Line’, epic throwbacks and homage tracks like ‘This is a Rock Song’, as well as the empowering ‘Scab’ and haunting ‘Scar Territory’, Jane Doe’s debut album will no doubt become part of a new multi-generational soundtrack. Backed by international management and support, Jane Doe’s National (US/CDN) campaign launches along with their debut album, January 2019. This CanAmerican project has been kept hush-hush while in development and while being nurtured at PB&J Sound in Los Angeles. The debut album “Identified” was mastered by none other than the legendary Howie Weinberg. Above all else, Jane Doe is the generation that doesn’t fit a specific mold. Jane Doe is a square peg in a round hole. Jane Doe is the wave of people who identify with the past but shape the future. I am Jane Doe. You are Jane Doe. They are Jane Doe. We are Jane Doe. www.janedoe.band