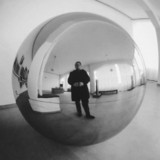 A hype-proof pathfinder, audio and visual designer in his own right, NOORDEN mastermind Alex Ketzer has been cutting new shapes for electronic music ever since his label came to be. Driven by his curiosity for the endless field-depth and horizon of possibilities offered by the electronic medium, Alex keeps on shaping and polishing a sonic identity that defies the conventions of dance-music related content and its more lounge-y counterpart. From his 2015-issued maiden album, Marianne Brandt, to his sophomore long-player Otc , Alex has grown and amplified his vision, wholeheartedly embracing the deeper end of the spectrum, evocatively adorning his downtempo tapestries with finely textured membranes, soft tapping drums and webs of reverb-soaked riffs and emotionally stirring chords. Draped in dubbed-out melancholia but setting off towards upper elating spheres through elegant meshworks of streamlined synth envelopes and low-key harmonics, Ketzer’s sound somehow feels riddled with synesthetic capacities, making you hear sounds where colours boil off into volutes of sound. Released in March 2020, Alex’s third studio full-length デモテープ makes for a conceptual piece composed and revolving around the 1981 Fender Rhodes MKII which cuts a broad window open into the German producer’s idiosyncratic world. An otherworldly journey, much like any of Ketzer’s other pieces to date, that’ll take you straight to a bubble of cozy, introspective magnification.