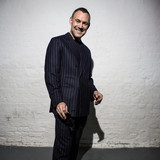 2020 marks the 20th anniversary of White Ladder’s big breakthrough year. To celebrate, there will be a re-release of the fully remastered album in various formats, including for the first time ever on vinyl, a deluxe package with demos and outtakes, and also a worldwide tour. David Gray’s debut album, 'A Century Ends', was released in 1993, followed by 'Flesh' in 1994. After touring with the likes of Radiohead and the Dave Matthews Band in support of his third album 'Sell, Sell, Sell', David decided to self-finance his fourth album, 'White Ladder', and release it on his own label, IHT Records, in 1998. As David’s recording success grew, so did his reputation as a live performer as he toured all around the world playing such iconic venues as London’s Earls Court and Royal Albert Hall, New York’s Madison Square Garden, and the Los Angeles Hollywood Bowl. In 2016, David released 'The Best of David Gray' and 'Gold In A Brass Age' in 2019. During the span of his career thus far, he has the best selling album in Ireland ever with 'White Ladder', a BAFTA nomination, two Ivor Novellos, a Q award, two Brit nominations, and a Grammy nomination.